Masdar City, Abu Dhabi’s flagship sustainable urban development, has embarked on the next phase of its sustainable mobility network with today’s formal unveiling of its first NAVYA autonomous vehicle.

Capable of transporting up to 12 people, the ‘Autonom® Shuttle’ was inaugurated in the presence of dignitaries representing the Department of Transport, Abu Dhabi Police, and the French Embassy.

Designed by the French autonomous vehicle pioneer NAVYA, the Autonom® Shuttle is a self-driving electric vehicle dedicated to first and last-mile transportation. It carries up to 12 people with 8 seated, is fully autonomous and has a top operational speed of 25 kilometres per hour.

Having successfully completed a rigorous pilot phase, the NAVYA shuttle will shortly begin a regular all-day service linking Masdar City’s parking areas with its main podium. The service will be the first operational use of the technology in the Middle East and North Africa.

“Masdar City is built on the three pillars of economic, societal and environmental sustainability and the introduction of our first NAVYA vehicle perfectly illustrates this philosophy in action,” said Yousef Baselaib, Executive Director for Sustainable Real Estate at Masdar. “With urban mobility at the forefront of the sustainability conversation in the UAE and worldwide, and with the business, residential and research community here at Masdar City continuing to flourish, Masdar is building on its legacy as a catalyst for clean-tech innovation to bring cutting-edge and commercially viable autonomous mobility to the streets of Masdar City.”

“Masdar City’s iconic Personal Rapid Transit (PRT) system, which has carried more than 2 million passengers in eight years of operations, established a benchmark for driverless and sustainable mobility in the UAE,” added Baselaib. “The introduction of our first NAVYA shuttle represents the next exciting phase of the city’s mobility journey.”

Working closely with Abu Dhabi Department of Transport and NAVYA Group, the NAVYA shuttle was customised to mitigate the effects of the Gulf’s extreme heat and humidity on battery performance. Rigorous health and safety testing was also carried out to safeguard passengers and pedestrians.

The vehicle uses on-board cameras and sensitive LIDAR sensors creating 3D and 2D “perception maps” to detect obstacles and their position relative to the vehicle. GPS technology further allows the vehicle to define its precise location, as well as V2X to communicate with traffic lights.

Mohammed Darwish Al Qamzi, General Manager of Integrated Transport Center, Department of Transport in Abu Dhabi (DoT), said: “The arrival of autonomous mobility at Masdar has been the result of a highly successful collaboration between the DoT, Masdar and NAVYA, which has further raised the profile of Abu Dhabi as leader in environmental best practice and sustainable urban development. Today’s launch supports Abu Dhabi’s strategic aim to realize a world-class transportation system for the benefit of both residents and visitors, unlocking in the process further social and economic gains for the emirate of Abu Dhabi and the UAE.”

At Abu Dhabi Sustainability Week 2018 in January, NAVYA was selected as the winner of a global industry competition to supply Masdar City with the latest models of autonomous electric vehicles.

“We are proud to be working with Masdar, a global leader in renewable energy and sustainable real estate,” said Jérôme Rigaud, NAVYA Group Deputy CEO. “NAVYA is delighted to provide Masdar City with its fully autonomous and smart solutions, providing users with a new way of getting around. Masdar City is the perfect place to commemorate the first deployment of the NAVYA Autonom® Shuttle in the MENA region, where we expect expansion within Masdar City to be broad and decisive in the coming months.”

Implementation of Masdar City’s wider transportation strategy will see the arrival of a fleet of seven Autonom® Shuttles from next year. Over time the shuttle route map will be expanded to connect the Etihad Eco Residence complex above the city’s North Car Park with the headquarters of the International Renewable Energy Agency (IRENA) and Majid Al Futtaim’s My City Centre Masdar shopping mall due for completion in the first half of 2019. 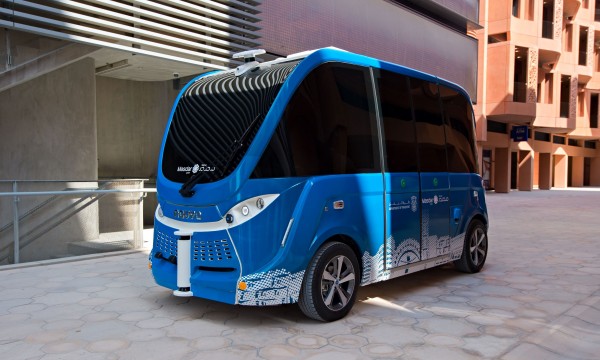