Abu Dhabi, United Arab Emirates, 15 January, 2019 – Masdar, the Abu Dhabi Future Energy Company, and Taaleri Energia, a Finnish wind and solar developer and fund manager, signed an agreement for the establishment of a joint venture with the aim of developing renewable energy projects in Central and Eastern Europe. The joint venture aims to build upon the success of Masdar and Taaleri’s ongoing activities in the Western Balkans by expanding their collaboration through the joint development of onshore wind and solar photovoltaic (PV) projects.

The joint venture agreement was signed by Karri Haaparinne, Deputy Chief Executive Officer of Taaleri Plc, and Bader Al Lamki, Executive Director of Clean Energy, Masdar, on the sidelines of the World Future Energy Summit (WFES), which is being organized as part of the Abu Dhabi Sustainability Week (ADSW) 2019 at the Abu Dhabi National Exhibition Center (ADNEC).

Bader Al Lamki, Executive Director of Clean Energy, Masdar, said: “What we’ve accomplished in partnership with Taaleri in Serbia and Jordan is a testament to the important role that strong partnerships play in unlocking access to renewable energy. We are proud to build on the experiences gained through our strong collaboration, to help countries in Central and Eastern Europe meet their renewable energy goals.”

Masdar and Taaleri have decided to jointly pursue the development of renewable energy projects in the Central and Eastern Europe region, due in part to the forecasted growth of renewable energy in the region and the substantial volume of opportunities. This includes the Polish onshore wind market, where more than 3 gigawatts of new capacity is expected to be added over the next few years. At the same time, multilateral institutions have recently urged the West Balkan countries to consider replacing a significant portion of their 9 gigawatts of aging coal-fired generation capacity with renewables, while Greece has announced plans to add up to 2.3 gigawatts of new solar and wind capacity by the end of 2020.

Karri Haaparinne, Deputy CEO of Taaleri Plc, said: “We are pleased to build upon our successful experience of investing in Serbia alongside a highly-professional, world class partner such as Masdar.”

Kai Rintala, Managing Director of Taaleri Energia, continued to articulate the underlying strategy for the venture by saying: “Working together with Masdar in this joint venture we will generate high quality deal flow in Central and Eastern Europe which will provide the funds that we manage opportunities to invest in the region in attractive projects with high calibre investment, financing, equipment and construction partners and counterparties.”

The proposed joint venture between Masdar and Taaleri will further strengthen the companies’ strategic alliance in renewable energy. The Taaleri Energia SolarWind I fund has invested alongside Masdar in the Čibuk 1, 158 MW wind farm in Serbia, and in the Baynouna Solar Energy Company, which is constructing a 248 MWp solar PV plant in Jordan, the largest in the country.

Masdar has steadily expanded its renewable energy portfolio in the Balkans through investments in large-scale onshore wind projects. In addition to the Čibuk 1 wind farm in Serbia, Masdar announced in 2018 that it had acquired a 49 per cent stake in the 72MW onshore Krnovo wind farm, which became Masdar’s second wind farm investment in the region.

About Masdar
Abu Dhabi’s renewable energy company Masdar is advancing the commercialization and deployment of renewable energy, sustainable urban development and clean technologies to address global sustainability challenges. Wholly owned by Mubadala Investment Company, the strategic investment company of the Government of Abu Dhabi, our mandate is to help maintain the UAE’s leadership in the global energy sector, while supporting the diversification of both its economy and energy sources for the benefit of future generations. Masdar’s renewable energy projects are located in the UAE, Jordan, Mauritania, Egypt, Morocco, the UK, Serbia and Spain.

Taaleri Energia is part of the Taaleri Group which is listed on the Nasdaq Helsinki stock exchange. Taaleri Group had EUR 6.0 billion of assets under management at the end of June 2018. 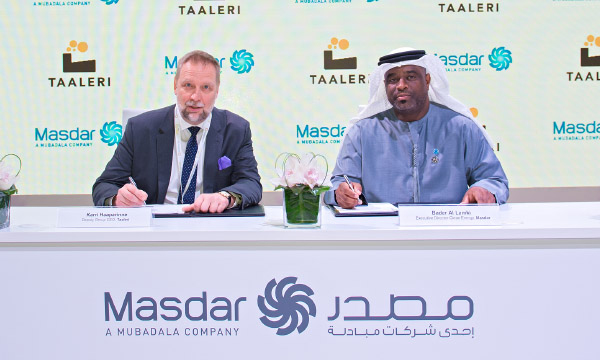