HRH, the Duke of York opens Masdar Building at the University of Manchester


Abu Dhabi, United Arab Emirates; December 11, 2018 – Masdar, the Abu Dhabi Future Energy Company, has hailed the official opening of the Masdar Building, which houses The University of Manchester’s Graphene Engineering Innovation Centre (GEIC), as an important step forward in its commitment to advancing clean-tech innovation around the world.

Masdar is the principal funder of the purpose-built facility which was unveiled yesterday at a special ceremony by His Royal Highness, the Duke of York.

Also attending the opening were HE Rawdha Al Otaiba, Deputy Head of Mission of the United Arab Emirates Mission; Dr Nawal Al-Hosany, the Permanent Representative of the UAE at the International Renewable Energy Agency (IRENA); and Dr Steve Griffiths, Senior Vice President for Research & Development and Professor of Practice at Khalifa University of Science and Technology.

Thanking The University of Manchester and all the funding partners, Mohamed Jameel Al Ramahi, Chief Executive Officer of Masdar, said: “The Masdar Building reflects our combined efforts to incubate technologies that will unlock clean energy solutions and sustainable development globally. Our partnership with The University of Manchester, and the Khalifa University of Science and Technology, represents a journey of innovation and discovery to transform graphene into real-world, commercially viable solutions.”

Stronger than steel, thinner than paper and highly flexible, graphene was first isolated by University of Manchester scientists Andre Geim and Konstantin Novoselov, who were jointly awarded the Nobel Prize in Physics in 2010 for their groundbreaking experiments to characterise the material.

Graphene’s unique properties could be used for a range of applications in the future, including energy storage solutions, water purification technology, lightweight aeroplanes, mobile phones, and even clothing.

Scientists from the Khalifa University of Science and Technology and The University of Manchester have been pursuing a number of R&D projects in graphene. These include developing 3D printed foams for the aerospace and robotics industries; using graphene sheets to enhance water treatment and desalination technologies; and producing graphene-based inks as micro-sensors for energy and other industry applications.

“The centre supports the business strategy of Masdar to participate in advanced clean technologies as soon as they show commercial potential,” Al Ramahi added.

Over the past 10 years, Masdar has invested in a number of renewable energy projects in the United Kingdom, including London Array, one of the world’s largest offshore wind farms, which marked five years of operations this year; the 402-megawatt Dudgeon offshore wind farm, launched last November; and Hywind Scotland, the world’s first commercial-scale floating wind farm. In May this year, Masdar announced the connection of the smart battery solution Batwind to Hywind Scotland, the first energy storage facility of its type linked to an offshore wind project.

Combined, the UK renewable energy projects in which Masdar is a partner represent a total power generating capacity of more than 1 gigawatt – enough clean energy to supply nearly 1 million homes.

Also speaking at the event, President and Vice-Chancellor of The University of Manchester, Professor Dame Nancy Rothwell, said: “The official opening is significant because the Masdar Building will house the Graphene Engineering Innovation Centre, which will accelerate the commercial and economic impact of graphene and help revolutionise many sectors by utilising the unique properties of graphene and other two-dimensional materials.

“It is not an overstatement to say the opportunities this represents are huge, and this has been made possible by the generous support of our funders, including Masdar, as our principal funder.”

The 8,400-square-metre GEIC building, designed by architect Rafael Viñoly, is located on The University of Manchester’s North Campus. It will house pilot production facilities and conduct research into other advanced materials, as well as graphene. 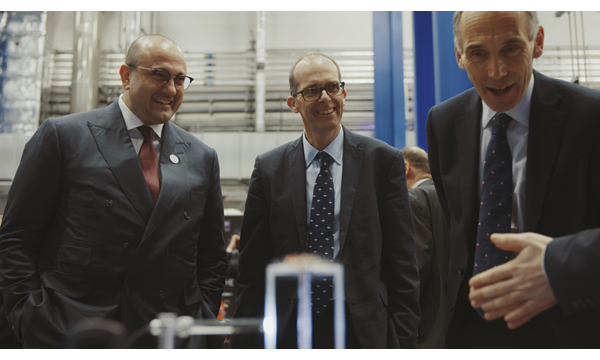